How To Have More Dinner Parties 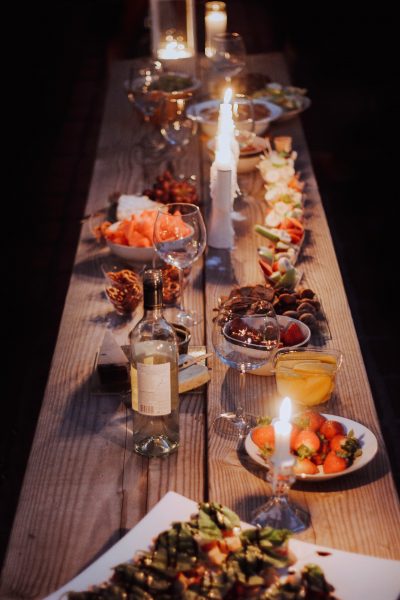 Written by someone who has experienced the woes of hosting, but has also tasted their fair share of success

Before you condemn planning another dinner party, I’d like to remind you that it’s hard for us all, not just you. Yes, I’ve hosted some successful gatherings in the past where my charcuterie board blew minds and people only left because the inevitable circadian rhythm screaming for sleep became stronger than the lure of another wine refill. Regardless, I’ve also had many failed attempts at pulling a gathering together which has taught me valuable lessons in addition to spawning a series of nightmares in which heaping platters of food lay before only my husband and me in an empty Hogwarts dining room that we were expected to fill with guests.

The truth is, it can take an immense amount of effort to get your Friday night soiree to where you’d like, but once you’ve learned some strategies to pull it all together, achieved clout amongst food-loving peers, and gotten your dog to behave as if you have people over all the time and it’s really no big deal, you’ll be flying high, eating well, and spending more time with the people you love.

If experience, nay failure, has taught me anything at all, it’s that the hardest part about hosting a dinner party comes down to getting people to show up. Even if you’re the coolest cat in the neighborhood, people’s inherent laziness tends to transcend your efforts (especially when it’s cold outside). The hardest part for some is simply emerging from the comfort of their home or that having plans can feel like a daunting commitment. You know this—you’ve seen the memes. Don’t pretend you don’t feel it, too.

All in all, we need to coax the Kermits of the world out of their homes, because we know they’ll have fun and so will we. So while the most crucial part of a dinner party, the people, remains just beyond your control, there are some things you can do to trick—er—encourage people to attend.

When inviting someone, encourage them to bring a friend along.

Suggesting your invitee bring a guest along is a simple gesture to show that you want your friend to feel comfortable at your event. It’s also an opportunity for you and other guests to meet new people, and you never know when a new face will become a serial attendee who advocates for you to host more often (the dream). When everyone brings a pal, your dinner party will consequently double in size which makes you look way cooler, the overall group’s diversity is instantly elevated, and your friend will be less likely to cancel and more likely to feel at ease when socializing alongside a comrade.

Be overly specific with what to bring

Have you ever been told to “bring a side dish” and then spent an inordinate amount of time pondering what side dish to bring and what the side dish will say about you? If you bring an elaborate 12-layer lasagna, people might think you have no hobbies. If you bring a simple veggie tray, people could assume you’re lazy or can’t cook… Or maybe you were told nothing at all and brought a bottle of wine, which you told yourself was a safe contribution, but then the host accepted it with minimal reaction and placed it next to the seven bottles of wine that the other lame, indecisive guests also brought along.

Giving each guest a specific item to bring takes the guesswork out for your attendees, makes them feel important and connected to the success of the event, and helps you ensure your party has a perfectly curated array of drinks, food and snacks (it’s not manipulation, just proper planning—planning to have exactly what you want…so you won’t lose prime cheese board real estate to another stinky chunk of blue cheese ever again).

Give people the illusion that others have already committed to attending

If you remember anything, let it be this piece of advice. Think carefully about how you word your invitation text. Why? It’s the hook, line and sinker that initiates your potential guests’ perceptions of your event. If the bait isn’t just right, the fish won’t bite. The unfortunate reality of humans (and apparently fish) is that no one wants to have a stake in uncool territory…historically, it’s just not how our ridiculous minds work. But if it already seems like others will be in attendance (which must mean it’ll be fun), you’ve just mind-tricked your guest into wanting to show.

Think of it this way: People from Akron probably felt pretty indifferent about declaring their hometown before LeBron James reached stardom. But now people love the idea of being from an area where this worldwide superstar had his humble beginnings. And while The King won’t be attending your dinner party, he’s taught us that the lure of mediocre places relies upon people’s perception. Is it cool if you grew up near LeBron? Yes, technically it is. Is your dinner party cooler because it seems like people have already committed? Probably so.

Use definitive phrases like, “People will be arriving around 7pm and will be dressed casually,” vs. “Come around 7pm and feel free to dress casually.” Once they know (or think they know) that others have committed to a fun night at your house, they’ll be knocking on your front door holding a block of your favorite cheese before you know it.

Charcuterie Board (Tip: most of these ingredients are farmers market staples!)

Chorizo and Chickpea Braised Chicken Thighs (check out the recipe)

Simple Daiquiris (check out these recipes)

BACK TO THE BLOG